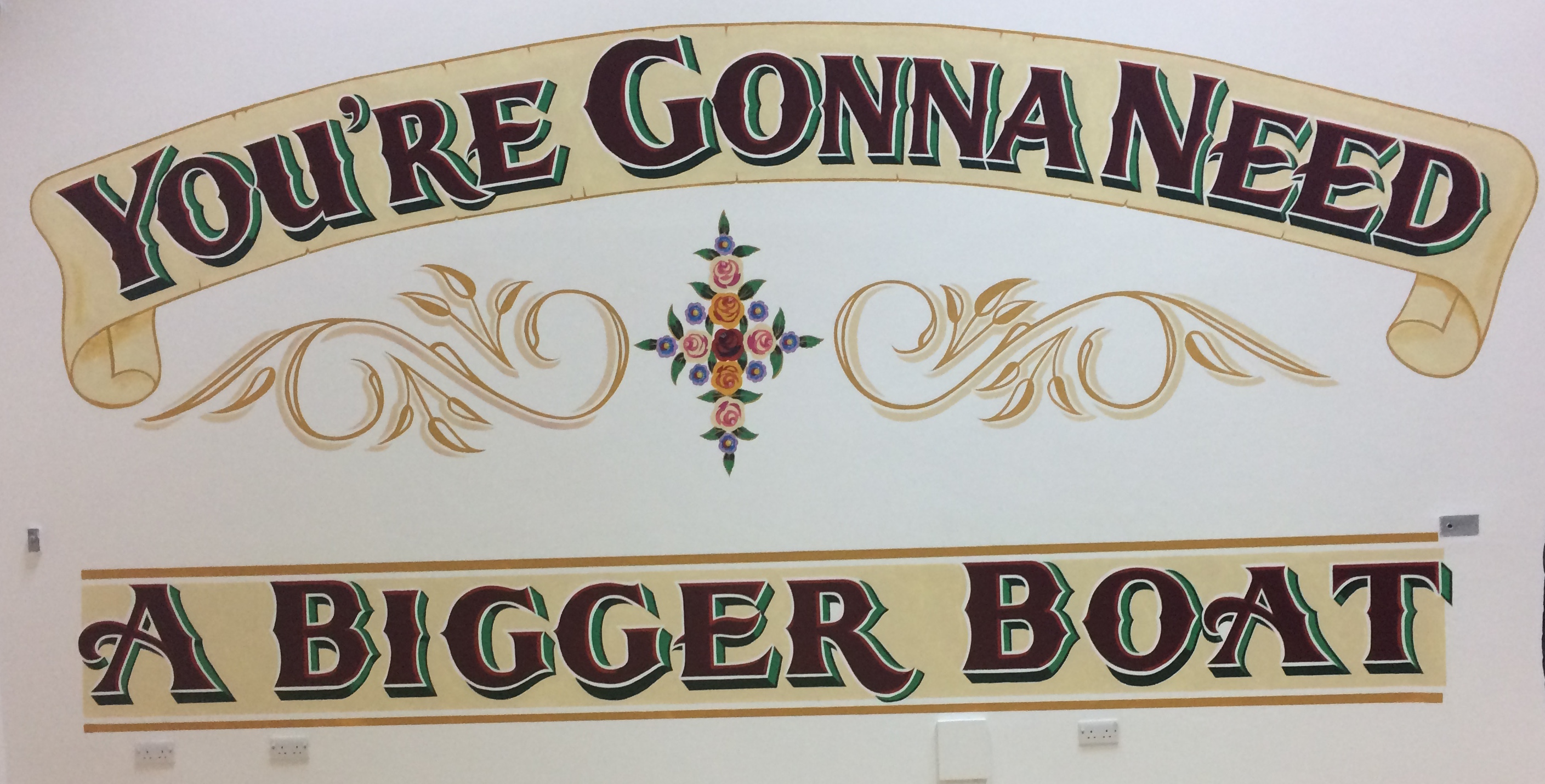 The name Jason Evans rang a bell but it was not until I arrived at the opening of this show that I realised from where. Evans is a photographer who works in music and fashion, and years ago I’d met him briefly when I was Japan, he was photographing that band that I like… At the opening I couldn’t resist introducing myself and this blast from the past rather freaked him out, he remains something of a Radiohead insider. Aside from this weird coincidence, I was drawn to the work in the exhibition, especially the re-contextualized shop signs and the vivid narrow boat-style sign writing taking up a whole wall.

After visiting, I got involved with Meeting to make ends try (Philip Hagreen t-shirt action), as I’ve been working (casually) in the library service and met the criteria of “public facing” worker. Lots of other volunteers around Nottingham have been photographed by Evans and these pictures have been shared on social media with the hashtag #youregonnaneedabiggerboat The image is one of a series of 16 wood engravings which featured in the exhibition. Philip Hagreen made them in the 1930s-40s for Catholic political magazine The Cross & The Plough and they are now held by the Ditchling Museum of Art + Craft.

Going back to the Bonington for the closing walk-through with Tom Godfrey and Jason Evans opened up some of the themes of the exhibition, and I’m glad I returned for a closer look.

Jason Evans lives on the Kent coast and his own contributions to the show were very much influenced by flotsam that he finds on the beach. The central piece, Wool and Clay, was made up of his living room rug and eroded bricks. The unrecognisably smooth shapes  matched the colours of the carpet. The piece played with ideas of ownership, houses and mortgages. Bricks are made near Pegwell Bay, said Evans, people are moving out to the coast as they can no longer afford to buy houses in London, when it comes down to it, all you’re left with is bricks… “Pegwell Bay is the place where the Romans first landed in Britain, where Christianity first landed in Britain and where the band CAN arrived to support Black Sabbath… it has significance…” A pleasing, to my ears at least, echo of Psychogeographical ideas about place, connections and coincidences .

With no wall text, just a fluorescent hand-out sheet with a short note and the names of the works, interpretation was left to the viewer, Evans wanted the work to be open to the community, not just the usual contemporary art crowd. Styling himself as a photographer and curator rather than “an artist”, Evans fretted that he might be straying into Jeremy Deller territory, but I see nothing wrong with that. So much contemporary, conceptual work feels cut off from a more general experience of the world. This felt like a show that welcomed you in, had moments of familiarity, moments of nostalgia and even of participation – the aforementioned T shirt project and an in-gallery photo opportunity, inviting interaction with a found object, a large length of rope washed up by Hurricane Doris on the Kent coast earlier this year, now sat on the gallery floor bearing the title Metaphor. The other work collected here all comes, in some way, from the working world. Clark Brothers’ retail signs (“There are no brothers, just one man in his shop in Manchester”, notes Evans, “it just sounds better.”), Sign-writer Dick Hambidge’s albums of photographs of his work photographed in turn by Evans, and Nottingham-based Narrow Boat Painter Robert Naghi’s painting, blazing the title of the exhibition on the wall at exaggerated size. This is creativity used in the service of small-scale commerce from a pre-digital, pre-internet age. On the one hand it makes those of us of a certain vintage yearn for a world now almost completely disappeared from 21st Century Britain, but conversely it also makes appealing visual material to be captured by the Instagram generation. (As you can see from the state of my photos, I belong to the former group.) Do the “digital natives”, the young art students of NTU, experience the same nostalgic melancholy that these works inspire in people who can remember when hand painted signage was all around us? “Photo albums are always a little bit sad,” says one younger visitor. Another points out that in Latin American countries, where the signs are still hand painted, these crafts are still ongoing. This show felt like a celebration of these specialised trades as well as an elegy for a time before absolutely everything was in the business of just selling you something. That said,  I left with an overwhelming desire to go into Clark Brothers and buy some signs next time I’m in Manchester.