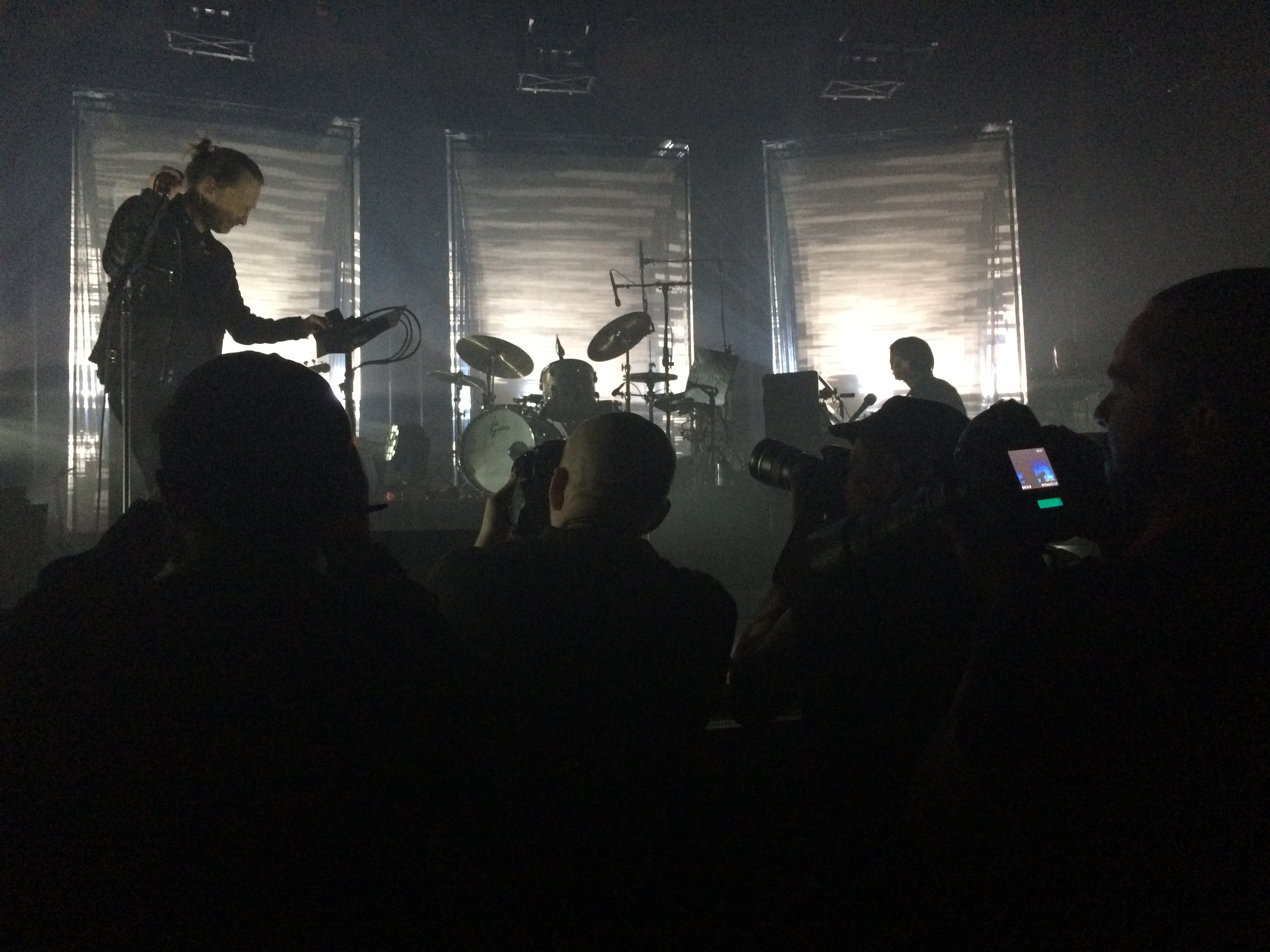 I’ve been going to see Radiohead live since 1993 and I’ve been writing about them ever since. Prior to the tour dates in May 2016, I’d been compiling my experiences into a blog, from which I will be publishing extracts. First, my report on the three gigs they played at London’s Roundhouse Thursday 26th, Friday 27th & Saturday 28th May 2016.

Radiohead have been opening their recent live sets with an excerpt from an interview with the great Nina Simone.

Interviewer: “No, you tell me!”

I’d been to see the opening shows of this short Radiohead tour in Amsterdam, then been home for a couple of days.

I find myself calling 999 for a man making a delivery at work, we think he’s having a heart attack. I stay on the phone, relaying instructions, watching colleagues give him CPR. I can’t panic, everything moves too fast and is too important. Ambulances and a helicopter arrive and he is whisked to hospital, it’s quite possible that he just died in front of us, may not come round, even though they have forced him to breath again.

It’s shocking and sobering, too much fucking perspective, but oddly after something so awful gets lifted off you, there is a feeling that anything can happen. That anything is possible and that you should do it now, for you could go at any time.

I head to London and to the Roundhouse for the first of three more shows.

At Chalk Farm (Camden) the queue is still fairly small by 4pm. I see old friends who have been travelling the world for this band, for years, but not as many of the usual crew because the tickets have been so hard to come by. Security are checking ID and wrist-banding people in the queue, ready to enter and have tickets scanned inside. 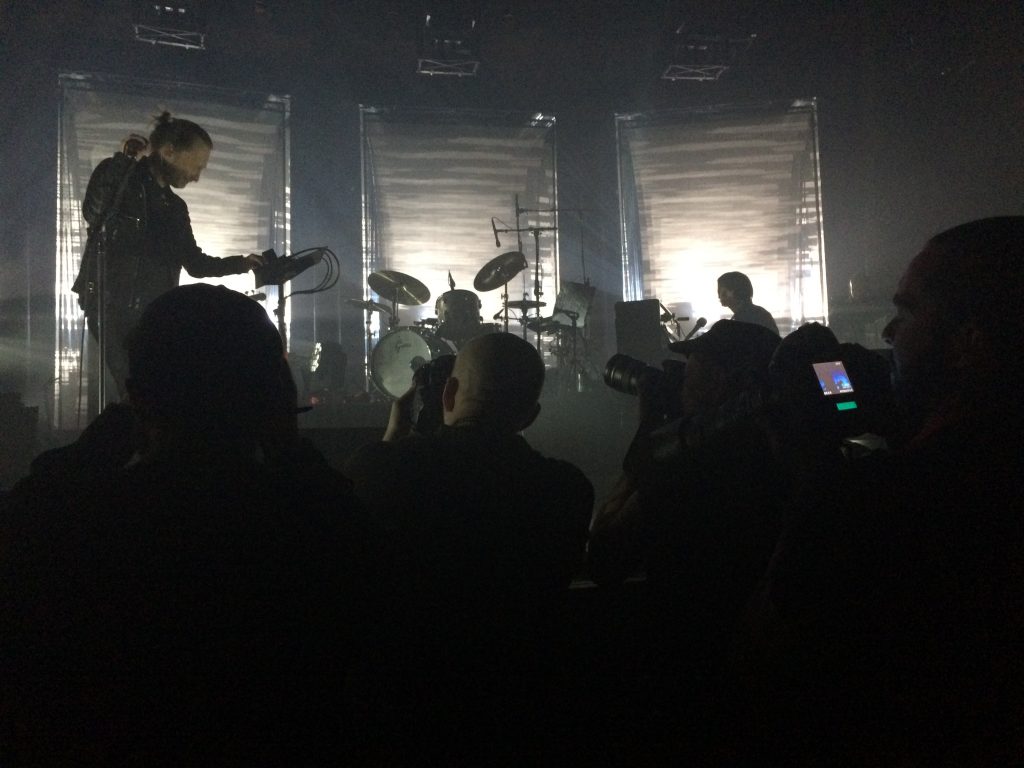 Through the magic of Radiohead we end up at the front of the crowd. I’m in the middle of the barrier, which no matter how much I try to convince myself is not the be all and end all, is the best thing that could have happened. The Roundhouse is a lot smaller inside than I expected, the stage taking up almost one third of the space. After the ambulance adventure yesterday, I’m almost preternaturally calm, which is a strange feeling. I try to stay loose through Holly Herndon’s set, but being at the front, right in the middle, makes you self conscious.

Radiohead play the first five tracks from A Moon Shaped Pool as they have each night of the tour so far, then Lotus Flower, and Talk Show Host – a much loved, and exceptionally funky B side. They drop My Iron Lung, like they know what I like. Gloaming. Exit Music (not a personal fave but always a bit of a moment in the set, Phil audible on backing vocals). Separator (which for some reason has been really hitting me on this tour) Identikit, The Numbers, a down and dirty Myxomatosis, a minimal Reckoner, ravey Idioteque and a broken up Everything In Its Right Place.

They go off and come back on. “Shall we just stay and play everything? You don’t have anywhere to be right?” This band are more relaxed than I’ve ever seen them. Magpie, 2 +2 = 5, Nude…

A harmonica noise comes from Jonny’s side of the stage and Thom chides him; “What’s up boss?” They start again, not missing a note. Planet Telex pleases this old fan and still sounds great. There There… and there is more.

Back for The Present Tense – “We’re gonna play a new song coz it’s like hitsville” says Thom, then they drag the piano out for You And Whose Army and finally Paranoid Android “before your vegan kebab”.

The crowd is as into this as the band are, making final bows to us in the centre, Thom mimes going to sleep. Like a douche I’m trying to wink and shut my eyes. I’ve missed something. The Italian girls next to me squeal and my friend, Keiko, nudges me, Thom just pointed at me. Yeah well, I have been here a few times before!

I can’t explain how this feels and heaven knows I have tried. It’s the same feeling back again, THIS, the most important thing. And they know.

Late afternoon I head back to Camden. My ticket for tonight has been bought by another old friend who won’t arrive until 5pm. I decompress in a pub near Camden Lock and “The Wibble Factor” kicks in; I talk fast, my hands shake, my eyes are wide. Things are out of my hands tonight and I’m nervous in a weird charged way that only happens at Radiohead gigs.

We hole up in the Roundhouse bar, check which entrance we have to use, and order more beer. I try to relax a little and talk to some long time fans. It’s easy to start trading stories once you discover what this band means to people.

We arrive in the auditorium half way through the support set, but saunter over to the far end of the stage, Jonny-side. The view is not as good as last night, but we’re still enough in the thick of it to see and to feel part of the show. It hurts less, not having to stand completely still, being able to get in and out and to move. 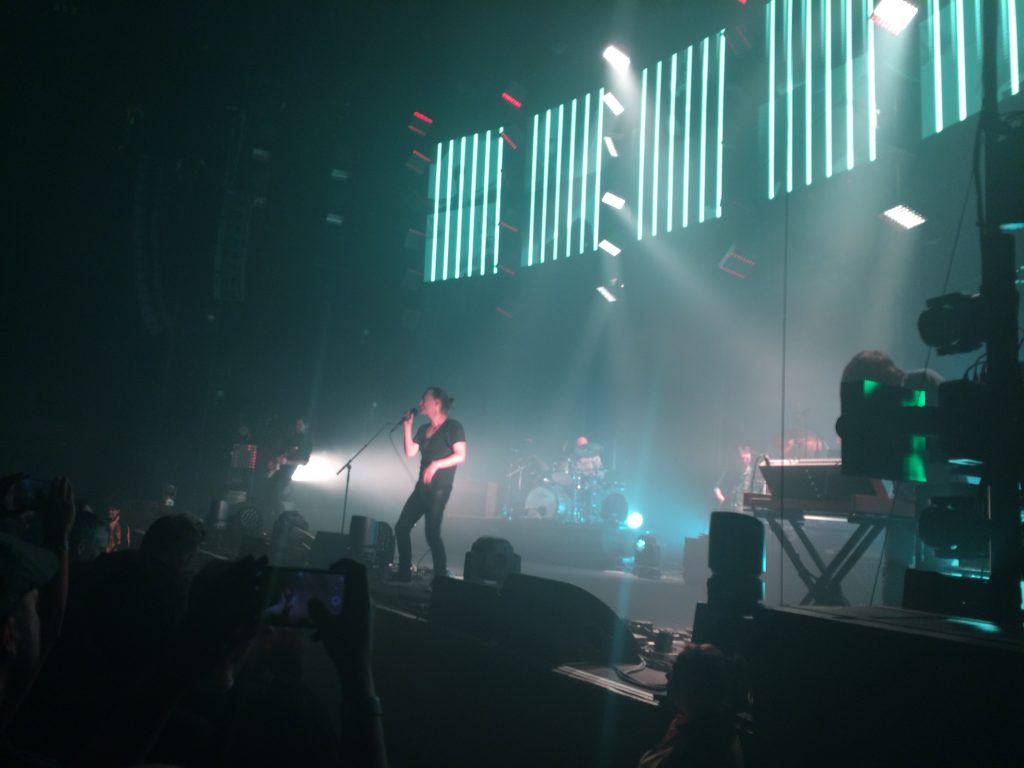 The new songs are getting into my system. Then they blow it up with Airbag and Kid A. Separator doesn’t kill me this time, but No Surprises tries.

Then Glass Eyes, just Thom on electric piano. Pyramid Song (one of my favourites) with Jonny bowing his guitar. National Anthem, The Numbers, Identikit, Myxomatosis again, Thom enjoying the rant of it, smiling like I’ve never quite seen before, he’s free up there. Bloom, Present Tense, Everything, Tinker Tailor, Arpeggi… they go off and back on for Bodysnatchers, Jonny punishing his guitar, trying to beat the ghosts out of it.

They end on Karma Police, the others leave the stage but Thom stands on the lip, still clutching his acoustic, willing the audience to keep singing (has he ever done it quite like that before?). He wants us to keep going. For a minute there I lost myself.

We tumble to the foyer, oh look up there is Nick Cave looking for a place to smoke his fag. I run into Jonny who says I looked like I fainted last night. I refute the accusation – I was just bending my knees. “You look like you’re enjoying yourselves up there”.

“Yeah,” he says, “We realised it’s fun at last.” We spot the actor Toby Jones, in a pork pie hat (apparently there were more famous folk somewhere else  – reports of Kate Bush, PJ Harvey and Benedict Cumberbatch do the rounds later).

Stumbling out into the night, rather soaked in gin, I pass a man in biking gear talking on his phone. Double take and realise it’s Chris Morris, and he’s just exited the back of the Roundhouse. Wonder if he’s been in the back talking Blue Jam with Thom?

I don’t have a ticket for tonight, but I call in a favour and show up in time for doors opening to wait and see if one can be made to appear. We feel it will happen. The same girl from security is on the gate, she is used to me by now. I hang around, standing back to let the increasingly star studded guest list inside. Samantha Morton, Polly Harvey again, at least two Peaky Blinders and a ridiculously cool looking fella, who on second glance is Mad Men’s John Hamm (in mirrored shades, jeans on just right, he couldn’t look more like a movie star if he tried).

They’re closing the gates and I’m starting to lose hope, when my contact comes to ask if I have cash on me. I’m whisked to the box office and sold one of the very last tickets in the place. The door staff are starting their final countdown to stage time and I just have time to rush to the toilet (my need to pee was becoming stronger than my need to see the band at this point) and they spark up Burn The Witch just as I make it inside. 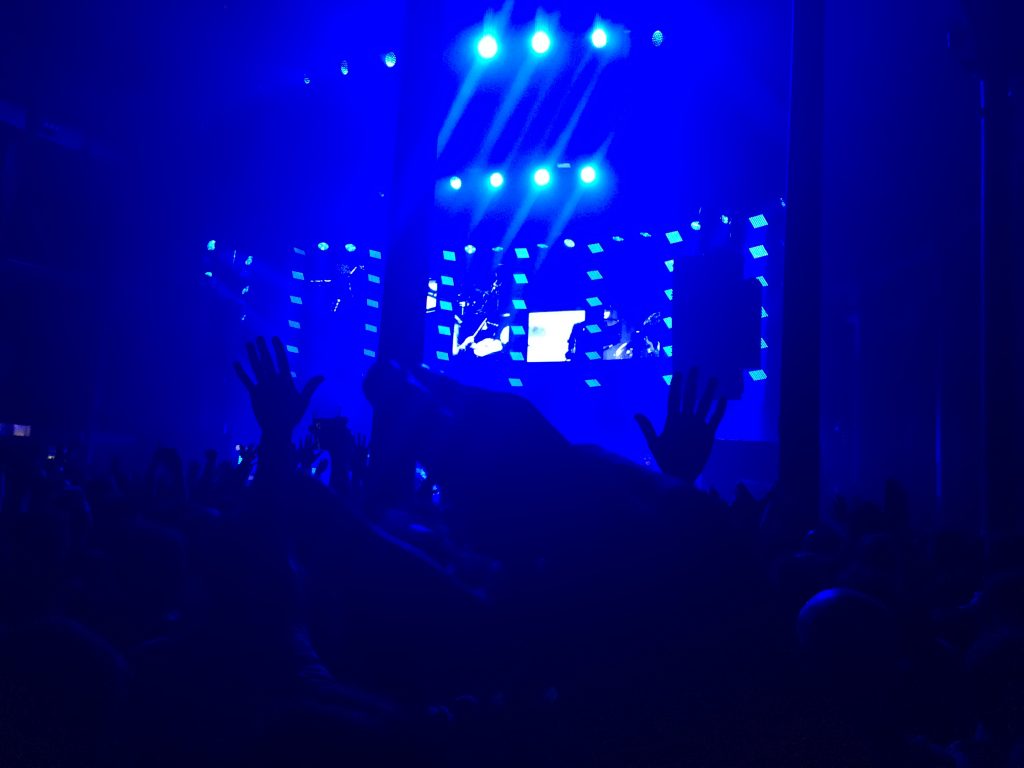 A Saturday night crowd in full effect: I’m stuck at the periphery of the space where people are drinking and talking, not necessarily as enraptured as those nearest the stage. It’s frustrating but at least I’m in. I try to see, I try to hear, I try to get out of the way of the bloody pillars that hold the roof up. I get beer and dodge other people, trying to have MY gig, but surrendering to it being THEIR gig. I nearly have a stand up row with two blokes in front, who are incessantly talking. It wouldn’t be quite so bad if they were saying something meaningful but it’s a pub chat, a slight disenchantment with the new songs. I pull faces until one of them turns on me.

“I just want to know why you would pay £65 to talk to your mate?” I ask. He does that thing which middle aged blokes do, and tries to sound like he knows better than little old me. They saw Richard Ashcroft here last week from the front row, and this is crap compared to that. I want to ask him why the hell he’s bothered coming. Getting tickets for this show was an effort for everyone. But I hold myself back.  I could tell him how many times I’ve seen this band, but I don’t want a conversation, I want some fucking respect.

I move to the bar and find myself among more cheerful types, who hug me when they find out I’ve been at all three shows. They sing along, are happy to hear the old ones, I let it wash over me, I dance, I stop straining to see. They can’t top last night and I don’t want them to. But there’s Like Spinning Plates and there’s my boys again.

I meet some more of the old crew, their kids now grown up and at the gigs with them. More drinks and I get a bit emotional, it always hits me at the end. I should keep my eyes open. It’s just a feeling, it’s just a feeling. Radiohead gigs are where I am most alive and where I am completely free – so don’t tell me where to stand, don’t drown out the best voice of his generation, don’t push me around, because you can’t hurt me, you can’t spoil it.

“Half my life, no fear,” says Nina in the interview.

“Half my life,” says Thom, backwards at the end of Daydreaming.

Half my life (well a bit more) I’ve been coming out for this band, and they still hit me harder than anything else.

What is free to me? THIS THIS THIS.

This blog was originally published by The Zine, creators united by passion!

Afterword: The casualty mentioned in this blog is now thankfully recovering.