These days Nottingham has thriving art and music scenes, independent shops, decent coffee and even the first independent UK book shop to be opened this century, Five Leaves Books.

Working in association with Walking Heads, my colleagues based in Glasgow, we realised that these two great post-industrial cities have much in common as they re-invent themselves for the challenges of the 21st century.

The tour looks at the history of the area of Nottingham now designated as The Creative Quarter and meets some of the people who work in the varied creative industries in the area.

The tour takes in The Lace Market, Hockley and Sneinton Market including New College Nottingham, where students of art and design learn their trade, and established independent craft practitioner Debbie Bryan who takes inspiration from the Nottingham’s lace heritage. There is art from leading gallery Nottingham Contemporary and curator Jennie Syson; Find hidden gems in unexpected places, like a Morris & Co window in the largest pub in town. Dig down to the caves and secret passageways of The Galleries of Justice, one of Nottingham’s top tourist attractions and discover some remarkable stories from the history of St Mary’s, Nottingham’s oldest and largest church and find out how it is used as a creative venue today; Learn about local cultural magazine Left Lion, who bring Nottingham musicians, actors and writers into the limelight. Explore the regenerated Sneinton Market and the thriving gallery scene around St Ann’s and Sneinton.

Celebrate 25 years of Nottingham media and cinema, at Broadway and find out about the “playable building” that is home to the National Videogames Arcade. Finally step through the gate of the transformed Cobden Chambers to find independent businesses getting established with the help of Creative Quarter, not to mention tales from Dawn of The Unread, where Nottingham’s literary past is woven with the many layered history of the textile and lace industries which built the grand architecture of The Lace Market…

The tour is narrated by Nottinghamshire-born Dorothy Atkinson, who you may know from her work in films made by Mike Leigh… we recorded at JT Soar, a nearby studio & music venue which used to be a Fruit and Veg warehouse.

The tour features archive photos from Picture The Past, who have kindly let me use images as a pilot scheme.

The tour is available to download free on Guidigo (which is also free) on iPhones, iPads and Android devices.

I’m working remotely at the moment, but I’m still in touch with what’s happening in Glasgow, including the forthcoming…

The Glasgow School of Yarn

This weekend (Friday October 17th  & Saturday  18th) sees the fourth annual Glasgow School of Yarn knitting and yarn crafts event at The Mackintosh Church, Queen’s Cross. It marks the anniversary of the opening of The Yarn Cake – Glasgow’s knitting cafe and is also part of the Creative Mackintosh Festival. 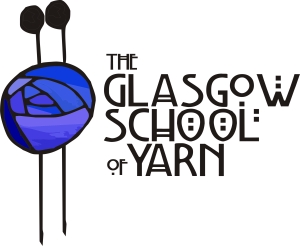 I’ve been helping to promote the event sending out press releases and tweets while Antje at The Yarn Cake has appeared on STV’s Riverside Show. The Herald have also featured it on their fashion blog.

This year The Glasgow School of Yarn will offer workshops with expert knitting tutors Jon Ballam-Dunn of Easyknits, Rachel Coopey of Coop Knits and Emily Wessel of Tin Can Knits (pictured at the top of the page). The Yarn Cake team will also be on hand to teach a range of mini tutorials on a wide range of subjects including introductions to crochet, spinning and lace, as well as a chance to learn more about the online knitting community Ravelry.

The marketplace will welcome independent vendors, including Abstract Cat, A Peppermint Penguin, Ginger Twist Studios, Debonnaire and Owl Print Panda. The Yarn Cake stand will also be selling Drops yarns, local yarns including New Lanark and Jamieson & Smith, Ashford Spinning Wheels and supplies, along with a wide range of needles and notions.

Full details of The Glasgow School of Yarn are on The Yarn Cake‘s website.

I’ve had a great response to this post, which I published on my old blog Little Raindrops, so I’m going to re-host it here.

I’ve been putting together information on the line up for a festival’s new website, collecting photos and what I’d call bios (i.e. short informative descriptions of each band) to go with an external web link for each artist on the bill. I thought this would be a straight forward task…

A lot of bands make this easy and have PRs to deal with requests for such things, or have great websites with all the material someone who is trying to spread the word about an event that the bands are involved in might need, but there are some who seem to need a bit of help…

Here’s some important things I’ve noted, if you want people to find out about your band:

There’s tons of advice out there from places like Hypebot, Musician Coaching and Fresh On The Net

Anyone got any more to add? I’d be interested to hear what you think. And don’t get me started on gig listings!